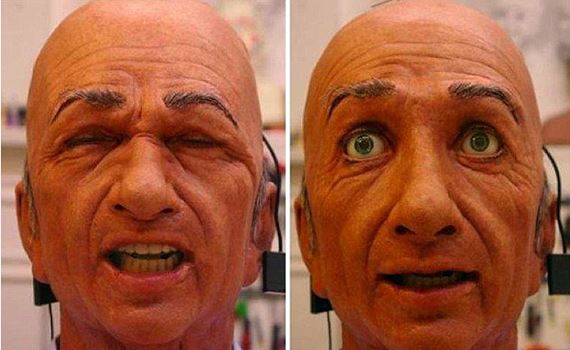 Cambridge created a robot that replicates the facial expressions of a person 27.03.2018    10:39 / Technological innovations

Charles became part of the program of the Department of Computer Science and Technology of Cambridge University. His employees are studying different ways of interacting with people and robots. They suggested that the presence of emotions in the answers of the machine will make "communication" more familiar.

Charles has 24 motors, they control the facial muscles. The robot moves the eyebrows, mouth, jaw and other parts of the design. The signal to them comes from the computer on which the software analyzing the data from the video camera is installed. She removes the human face and sends the picture to the computer. The whole process takes no more than three seconds.

Professor Robinson noted that the robot is assembled well, but it has yet to be improved: "Charles looks amazingly believable. The design is striking, but despite this, mechanical motors can not compete with real muscles. Our programs, controlling the expression, are still far from ideal. Analytic software, too, can not be called perfect, so the mimicry looks so unnatural.

Earlier, the Swedish funeral office announced its intention to create "electronic copies" of deceased people. At first they will imitate the voice of the deceased, and then they will find a similar appearance.