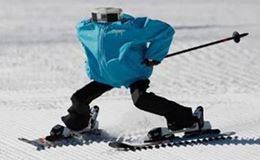 According to the newspaper The Korea Herald, the competition called "Edge of Robot: Ski Robot Challenge" was held on Monday, February 12, at the Hoengseong County ski resort, located near the Olympic Pyeongchang. They were attended by eight robots, created by teams from local universities and companies.

The task of small robots, dressed in ski jackets and pants and a bit like children, was to move faster competitors to the 80-meter slope, aligned with the trajectory of the route, marked by five gates. In total, robots were given three attempts, and the winner was entitled to a bonus of 10 thousand dollars.

Even for beginners, such a track is pretty easy, but the robots were difficult to get to. Because of the frost and strong wind, many of them started to junk and crashed into the gate or the path that enclosed the track, but some managed to reach the finish line. A small video review of the competition was published on the YouTube channel of the South Korean newspaper.
The winner of the competition was the robot Taekwon V, who at the first attempt overcame all the gates and completed the descent in 18 seconds. Earlier, its creators from the company MiniRobot published video training robot, which also demonstrates the work of the built-in obstacle recognition system.
Note that in December last year, two robots, created by engineers from the Korean Institute of Advanced Technology (KAIST), took part in the relay torch of the Olympic flame. At the same time, it was reported that the organizers of the Games-2018 plan to use 85 different robots that will meet athletes and guests at airports, and also help them in the Olympic Village and stadiums.