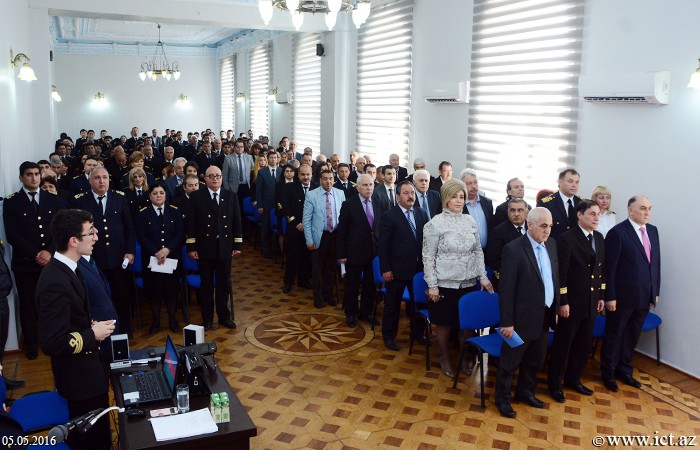 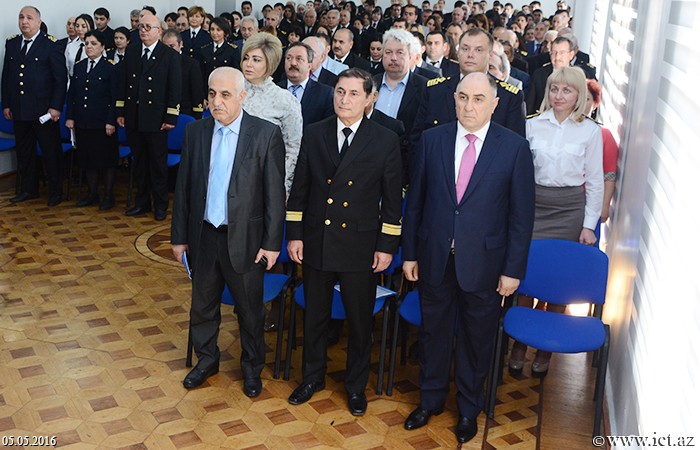 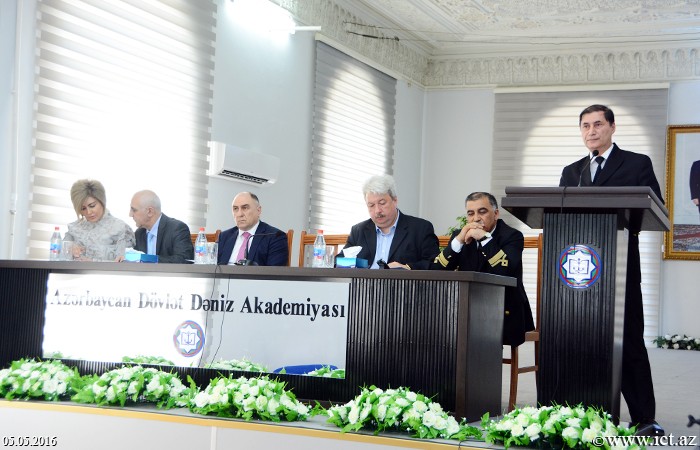 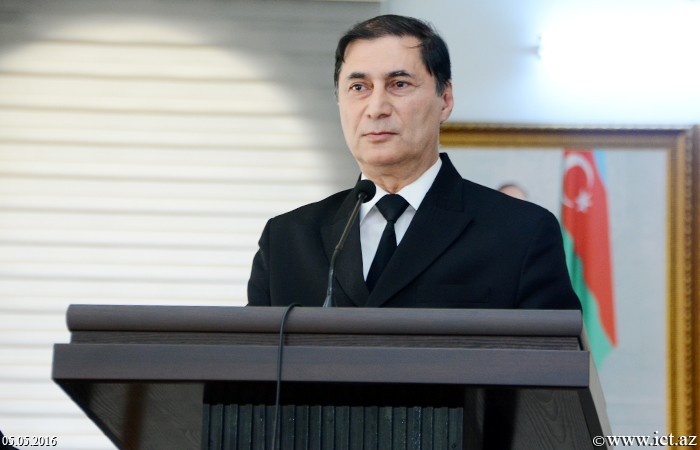 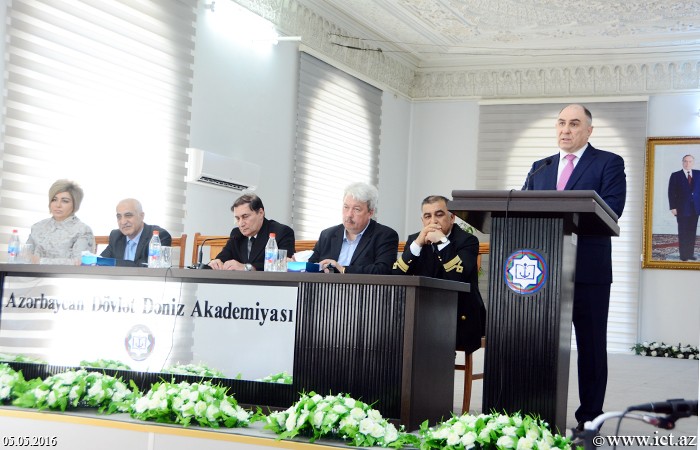 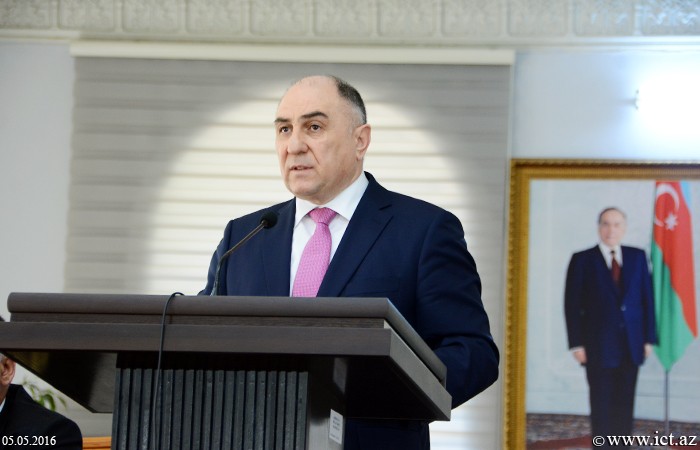 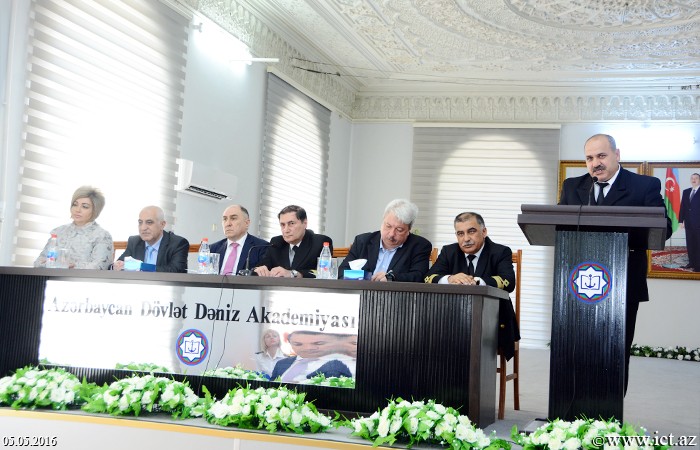 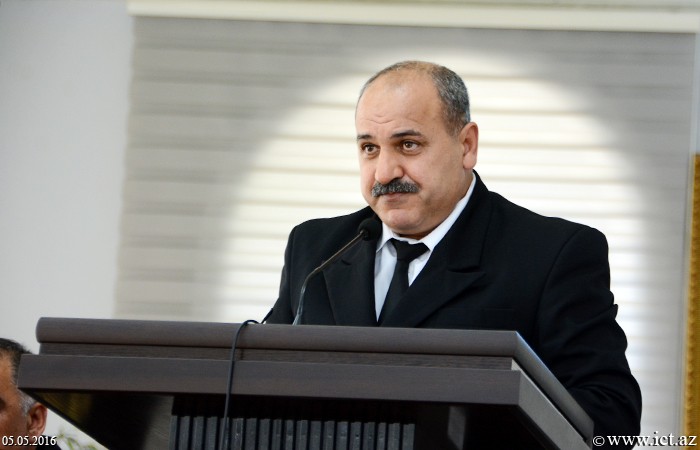 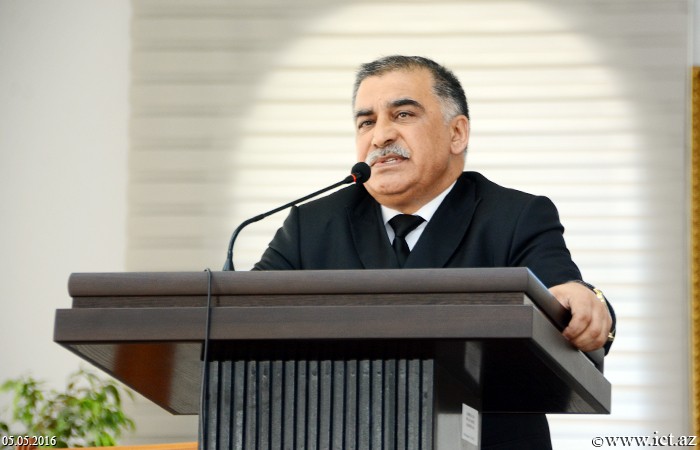 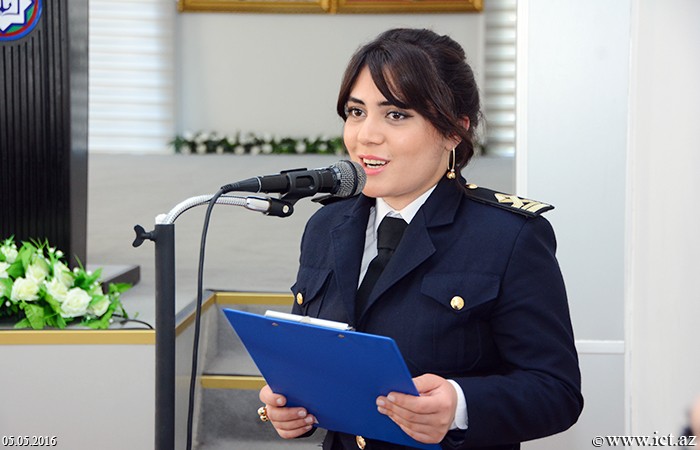 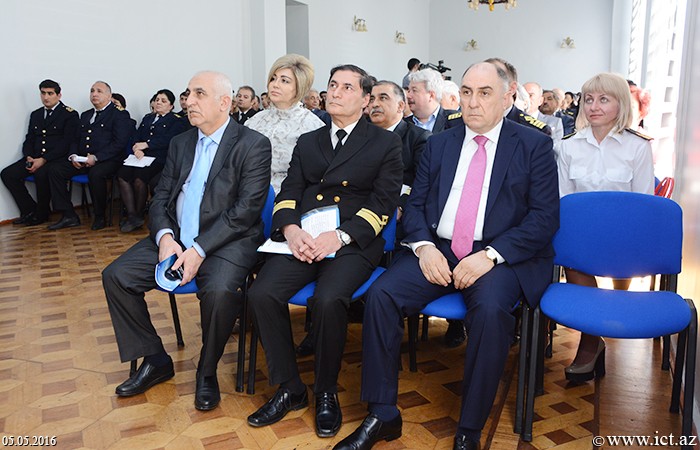 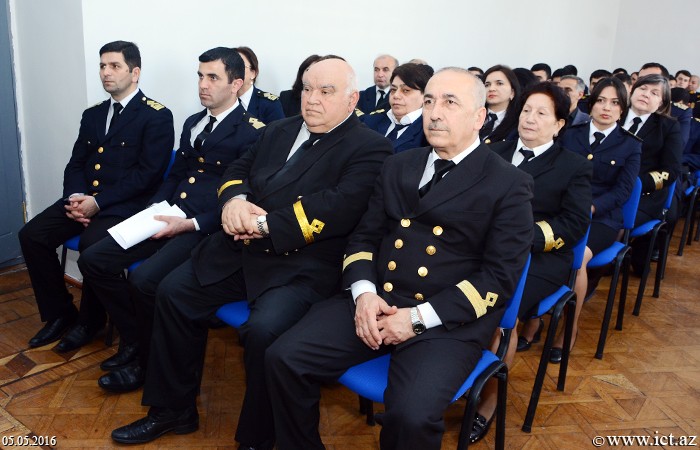 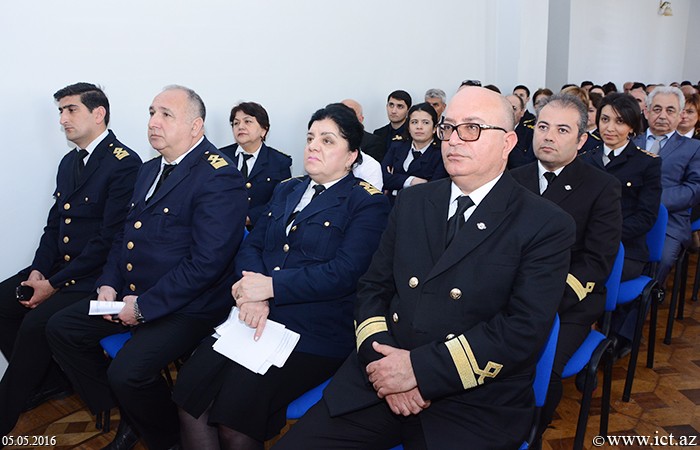 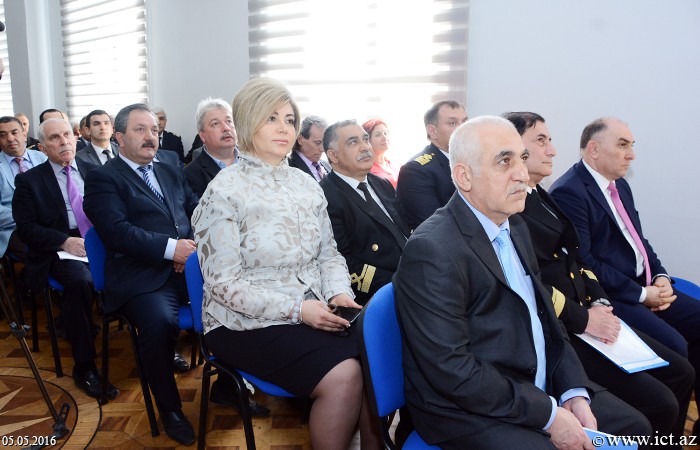 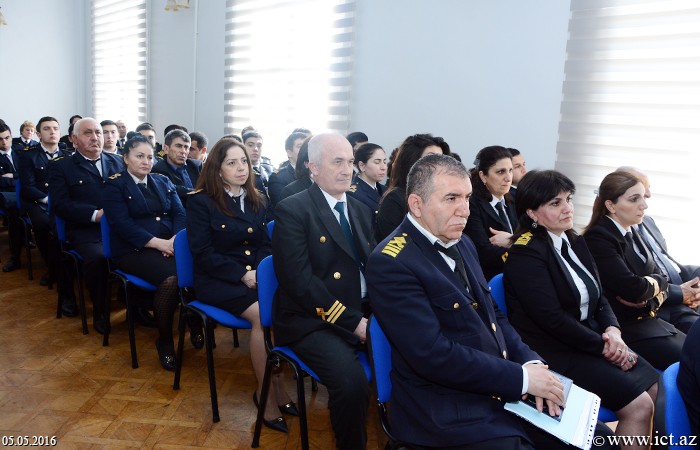 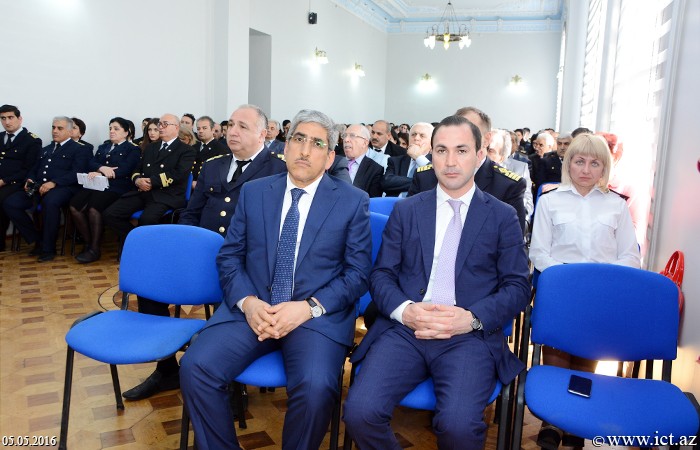 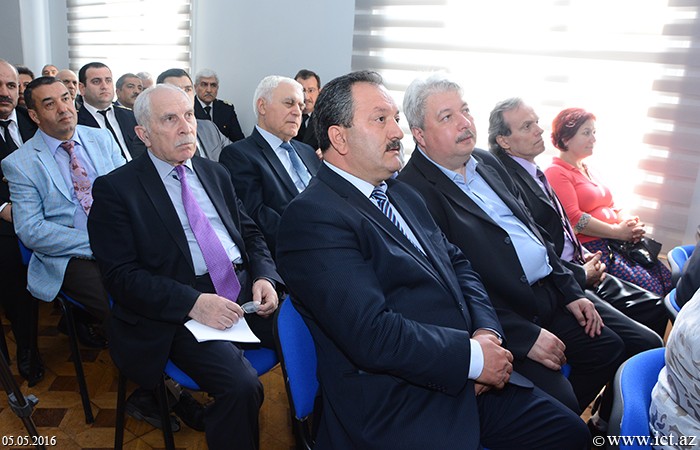 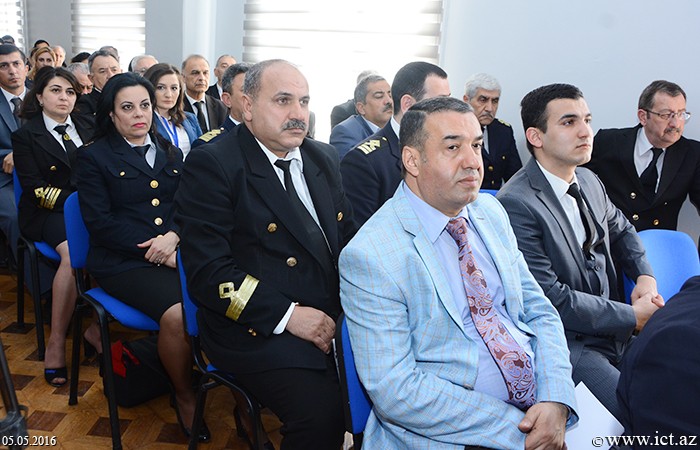 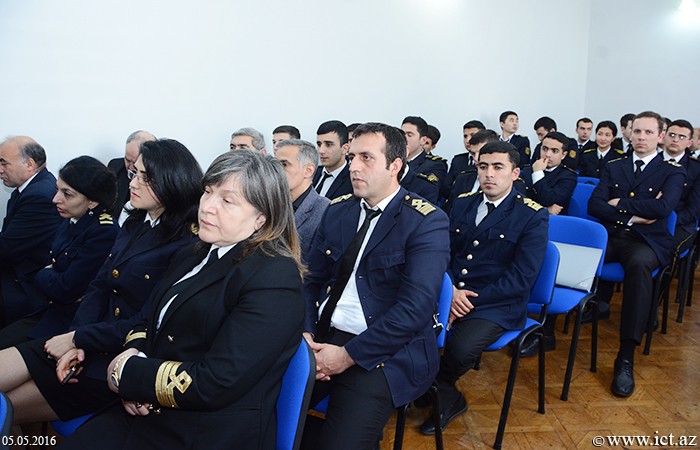 At the conference, along with the management of CJSC "Azerbaijan Caspian Shipping", ASMA and the Ministry of Emergency Situations, scientists and specialists from research institutions and higher educational institutions of our country, were also attended scientists from the United States, Turkey, Russia, Georgia, Ukraine and Belarus.

The event was declared open with a performance of the national anthem of the Republic of Azerbaijan.

Then was demonstrated documentary dedicated to the life and activity of national leader Heydar Aliyev.

Opened the event Vice Rector for Academic and educational work of ASMA, Professor Faig Naghiyev presented a report on "Today and future of Azerbaijan State Maritime Academy". Informing about the history of the Academy, F.Naghiev noted that, in 1921 was created Baku water transport technical college, in 1924 the college was transferred to the Azerbaijan Caspian Shipping Company: "From March 1944 the Baku technical school of water transport was renamed the Baku Marine School. By instruction of the great leader Heydar Aliyev, on the basis of the Baku Naval School was created Azerbaijan State Maritime Academy under decision of the Cabinet of Ministers of Azerbaijan Republic dated July 15, 1996. As a new direction of education in Azerbaijan this academy was the only institution of higher learning for the training of naval specialists".

Reported about celebration of 20-year anniversary of ASMA this year, the scientist noted that, for 2015-2020 has been prepared Strategy of Development of academy and definite purposes: "Main objectives of Development Strategy are creation in academy the infrastructure for teachers relying on the latest technologies, reduction of personnel preparation, educational infrastructure and control systems in compliance with the international practice and Development Strategy of academy, the solution of the scientific problems connected with marine science and also definition of the priority directions of scientific and technical researches".

He also noted that, the creation of a new system to manage education in all academic areas at the academy and stimulating activity of teachers, modernization of library activities, the commissioning of digital educational resources are included in the number of work provided to perform in the future.

He pointed out that, at the Training and Education Centre of the Academy 10 of 34 training courses approved in accordance with the standards of the certification of training courses and educational institutions of the United States.

Delivering lecture on “Scientific cooperation prospects between Azerbaijan National Academy of Sciences and Azerbaijan State Maritime Academy” Academician-Secretary of ANAS director of the Institute of Information Technology Academician Rasim Alguliyev highly appreciated the activity of “Azerbaijan Caspian Shipping” CJSC and stressed out the great role of this body in economy of Azerbaijan. According to him, “State Program on development of shipping in the Republic of Azerbaijan in 2016-2020” approved by Azerbaijani President Ilham Aliyev with the purpose of to match the shipping with international standards; development of water transport and sea transport services to ensure the competitiveness is of an indication of attention to this area.

Azerbaijan National Academy of Sciences, as a body coordinating all scientific ventures at the state level, highly estimates studies carried out at the Azerbaijan State Maritime Academy. Holding such kind of conferences is of vital importance in terms of training high qualified staff in this area and enhancing international ties, stated R. Alguliyev.

Academician put to the fore vital tasks set forth scientists by Azerbaijan President, application of high technologies and innovations were focused on, serious events were taken in formation of knowledge society.

"To improve efficiency of science at the state level, meanwhile, enhance of its application areas and to set up efficient scientific ties with scientific institutions all over the country are priorities of ANAS", - stressed academician and noted that "Azerbaijan Caspian Shipping Company" CJSC is one of these institutions. To this end, scientific institutions and organizations operating in the academy to collaborate with “Azerbaijan Caspian Shipping Company" in organization and integration of science and education, implementation of scientific research, and investigation of the problems of the Caspian Sea would benefit in terms of solving problems, he noted.

Chief department of “Social subjects and languages” of ASMA Assoc. Prof. Ilgar Abdullayev made a presentation on “Heydar Aliyev is a conceptual founder of Azerbaijan multiculturalism" and spoke about undeniable merits of national leader Heydar Aliyev, who specially positioned in the history of Azerbaijan history.

“Multiculturalism is a consistent part of state policy in Azerbaijan”, - stated a lecturer and noted that, multicultural theory relies on idea of Azerbaijanism, laid by national leader. He brought to mind declaration of 2016 as the “Year of Multiculturalism” by President Ilham Aliyev: “Today we proudly can say that Azerbaijan is known in the whole world not only an exporter of oil and gas, but also multicultural values. Tolerant and multicultural values gave impetus for unity of all people notwithstanding ethnicity.”