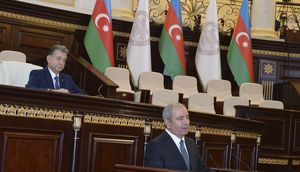 I congratulate all scientists on the occasion of 70th anniversary of ANAS on behalf of the staff of communications and high technologies.

As mentioned Mr. President Ilham Aliyev, in accordance to Development Concept “Azerbaijan 2020: vision to the future”, developing the economy of the country on account of the non-oil sector, increasing the export potential and minimizing dependence on oil are the main targets of our state. We can achieve all of these by means of science, education and application of innovative technologies.

In general, if we remembered the time at the beginning of the 70s, when the country's socio-economic development became poor, all areas, including education, science, and especially Academy of Sciences were paid attention by great leader Heydar Aliyev's came to power. Today, the new phase of development in the world  adopted three sacred hoops - knowledge, economy, and government which are set up on the formula of technological innovation. Starting 70s, development of science and education was mainstreamed in Azerbaijan. Constructing new plants in the fields of cybernetics, management, computer science and electronics - "NORD", "AZON", "Satellite", "Star" as well as commissioning of the giant industrial complexes as well as functioning the constructive bureaus due to to improve the efficiency of research and to test results, were contributions of national leader Heydar Aliyev.

In addition, at that time, research institutes of National Academy of Sciences for Space Studies, oil and gas, automation and electronic computing machines, as well as Radio plant were established. Unfortunately, the late 80s, early 90s, as a result of the activities of a recession, problems had been arising, particularly in the development of technical and applied sciences. By the commencement of the implementing new projects in Azerbaijan National Academy of Sciences since 1993 had resulted with development in all spheres of in Azerbaijan.

As a result of the activities of the National Academy of Sciences in 1994, the first real Internet launched in the region.

Since 2000, the next phase of development has begun in the country. After this period, social and economic development stabilized in Azerbaijan. State policy directed to the vision has already started. Purposeful constructive work by President Ilham Aliyev after 2003-2004 paved the way to this policy again.

Today, hundreds of Azerbaijanis are sent not only to former USSR but also to Europe to study at leading universities. As a result of the joint efforts of the Ministry of Education and Azerbaijan National Academy of Sciences has been formed a new intellectual potential.

Currently, the intellectual direction of the President's policy is to involve the employment of human resources. It is carried out in a new form. In his remarks, Mr. President noted that, establishing of industrial parks, economic zones, investments with preferential both domestic and foreign investors aimed at strengthening the capacity of the industry, are the basis of this policy. Intellectual property protection and the creation of start-ups as well as work carried out in this direction are visual evidence. Analyzes in many countries prove that each specialist conveys his efforts to other countries over the Internet. Knowledge can be purchased, here I mean patents, inventions, and articles. But to protect the human who is a carrier of knowledge and intelligence is the most important condition, that important steps are taken in this direction.

At the end of my speech on the occasion of the 70th anniversary of the Azerbaijan National Academy of Sciences, I would like to congratulate each of you. Today, we express infinite gratitude to AR President Ilham Aliyev for care and attention to science, education, and development of the intellectual human potential.

Thank you for your attention!