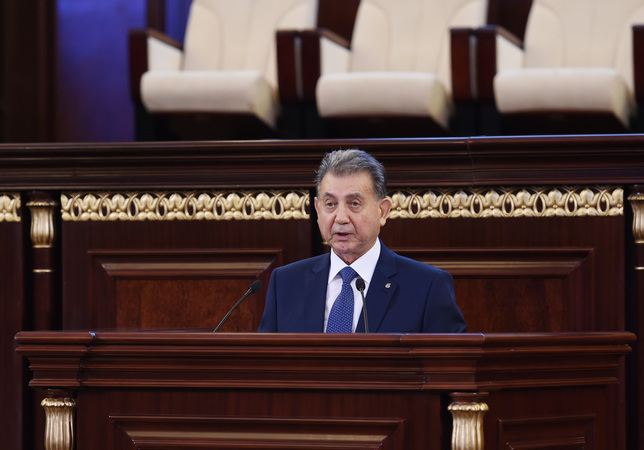 Let me, first of all, on behalf of all Azerbaijani scientists to express you gratitude for deeply meaningful speech. The purposes planned by you raised problems and tasks will make a basis of the program of our further activity. Of course, to implement all of this, along with the existing potential, we need young people with creative thinking, people who are able to develop new technologies and innovations, improving the material and technical base at the level of modern requirements and solution of social problems. I am sure that, due to your attention and care on the Academy all of this will be realized. Once again I express my deep gratitude and appreciation.

November 9 is a wonderful holiday in Azerbaijan. This is a Day of State Flag. His colors are always inspiring us to modernization, protection of national and spiritual values and the protection of the independence of Azerbaijan. The national anthem, created by Uzeyir bey Hajibeyli, one of the first members of the Academy is our State Emblem at the Academy is also one of the main symbols of our statehood. It is gratifying that, we are celebrating the anniversary of the Azerbaijan National Academy of Sciences in such a beautiful day. This has a profound symbolic meaning as the Azerbaijani science, as well as our flag is a symbol of statehood. In this sense, the anniversary of the Academy is a double celebration for us. Our current anniversary is particularly glad that a few days ago, Azerbaijani President Ilham Aliyev signed a special decree on awarding a large group of our scientists on the occasion of the 70th anniversary of the Academy. And today, Mr. President is our dear guest. Let me congratulate all of you on the occasion of our science. I wish all of you robust health, long life and success for the development of the Azerbaijan Republic, and the progress of its science. Dear participants of the meeting, in Azerbaijan which is one of the cradles of the ancient civilization, from ancient times interconnected develop the folklore, literature, philosophy, art, mathematics, ethics, geography, physics, chemistry, medicine and other scientific spheres. Today's Academy of Sciences is the successor of the Azerbaijani science developing and improved throughout centuries. The works of Nizami are the mirror, which most fully reflect the level of Azerbaijani science since ancient times to the Middle Ages. Nizami has clearly proved that on the one hand are the heirs of the Greco-Roman culture and on the other are one of the cultures has predetermined Muslim Renaissance, which was ahead of the European Renaissance.

The first members of the Academy, who continued the tradition of Azerbaijani science, whole life with great selflessness served it. Voiced their names again, I would like to honor light memory of each of them with great respect. They are Uzeyir Hajibeyli, Mirasadulla Mirgasimov and Samad Vurgun, Yusif Mammadaliyev , Alexander Grossgeim, Heydar Huseynov, Mustafa Topchibashev, Joseph Essman, Mirza Ibrahimov, Mikail Huseynov, Shamil Azizbayov, Mirali Qashqai, Sadig Dadashov, Alashraf Alizadeh and Ivan Shirokogorov. These names are inscribed in golden letters in the history of our science. With the development of the Academy also has increased its contribution to Soviet and world science and improved the role in solving the problems facing the republic. For 70 years, Azerbaijani scientists had many scientific achievements. Their glorious work was highly appreciated. Azerbaijani scientists were awarded by high state awards, various awards, and medals. The most striking point in the 70th history of the Azerbaijan Academy of Sciences accounted to 1970-1985. This stage in the history of the Academy is directly connected with the name of the national leader of our people Heydar Aliyev. During this period it is possible to note achievements of Azerbaijan Academy of Sciences in the field of investigation and development of oil and gas fields, the solution of scientific problems of deep drilling in difficult geological conditions, and also creation of a source of raw materials for development of the chemical and petrochemical industry, chemical and technological complexes, researches in the sphere of geography, geology and geophysics, ore and nonmetallic, and also other mineral deposits, in the field of power, mechanics, physics, mathematics, astronomy, informatics, creation of authoritative schools of sciences.

Since the early 90-ies of the last century in the life of the Academy began a heavy and dramatic period. The collapse of the USSR, the crash of traditional state and public institutes, deep economic crisis, legal vacuum all this are only part of problems which the Academy faced. Unfolded during that period, the campaign to discredit the Academy of Sciences in the public eye, trying to eliminate it as the abolition of union structures under the guise of the fight against totalitarianism, further exacerbated the situation. Fortunately, thanks to the unique policy of the Azerbaijani national leader Heydar Aliyev, Academy of Sciences was able to preserve its integrity. The most difficult period for our economy, we celebrated the 500th anniversary of the great Mohammad Fizuli and the 1300th anniversary of the Azerbaijani grandiose "Kitabi-Dede Gorgud" epic with great solemnity in the framework of UNESCO.

Dear participants of the event, for years of the management of our country of the President of the Republic of Azerbaijan Ilham Aliyev, as well as in spheres, are achieved success and in the academic science. Among the decisions taken by the esteemed President Ilham Aliyev for the development of science, occupy an important place "National Strategy on Science Development in the Republic of Azerbaijan in 2009-2015" and the Concept of "Azerbaijan 2020: vision to the future" approved by a special decree in December 2012.

Dear Mr. President, we met you at this hall, at the general meeting of Academy four years ago. For the last years, the appearance of the institutes of Academy was completely changed, the most part of programs for reforming is realized. Construction and commissioning of new buildings and the Scientific Library of the National Encyclopedia, which give a special beauty to academic campus are evidence of great attention and care about the development of science in our country.

Dear Mr. President numerous issues raised during our meeting either already have been resolved or are being addressed. On behalf of all scientists once again I express my deep appreciation for the great care of science. One of the important reforms carried out in the Academy at present is the integration of science and education. National Academy of Sciences, while remaining committed to the tradition attaches great importance to the integration of science and education. Now, there are dozens of department branches of various universities at ANAS.

Currently, there are dozens of department branches of various universities at ANAS institutes. Numerous members of the Academy and hundreds of scientists are directly involved in the educational process. Dear Mr. President by your support for the first time in the history of Academy the Master was established and reception of masters on nine specialties was held.

Close cooperation between our institutions with higher education institutions are the strategic line of academic activities. We express our gratitude for the great support and assistance in this regard.

Dear colleagues and guests, the staff of the Academy has come to the 70th anniversary, not with empty hands, valuable scientific works and monographs are prepared.

The edition of these works can be considered some kind of the result of activity at certain stages of the history of Academy. It is our anniversary gift. But one of this publications is especially dear to us.

I mean the book-album "Azerbaijan National Academy of Sciences in faces". It covers the activities of persons who, during the 70 years of their work multiplied scientific achievements of the republic. This is our history. Precisely this history lead us into the future and back into the past. Therefore this story, which attracts our attention also will interest our future generations.

Everyone knows that the ongoing reforms in science are the heavy and difficult process. During the 70th anniversary of the Academy, we are proud to say that together we have managed to preserve this irreplaceable heritage of Azerbaijan. Today, this sacred scientific center is alive and growing.

Dear Mr. President on behalf of the scientific community of Azerbaijan we express our deep appreciation for the attention and care to the development of science.

We assure you that the Azerbaijani scientists will always support state policy pursued by You in accordance with national interests to participate directly in the creation of our country's economy based on knowledge, and civil society closer together and multiply efforts to achieve this purpose.

Once again I express to You our sincere gratitude.