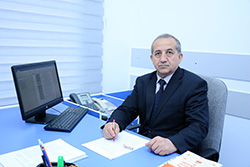 In 1989 he graduated from the Azerbaijan Institute of Oil and Chemistry named after M.Azizbeyov (present Azerbaijan State University of Oil and Industry) applied mathematics with honor diploma (served in 1983-1985).

In 1989-1997 he worked as a teacher of mathematics and computer science at various educational institutions.

In 1998 he started to work at the Information and Telecommunications Scientific Center of the Azerbaijan National Academy of Sciences  (now the Institute of Information Technology of ANAS) and began to deal with information security problems in computer networks.

He is the author of 104 journals, 115 conference articles and 8 books. 98 works were published abroad (in the USA, the Netherlands, China, Russia, Ukraine, Belarus, Latvia, etc.).

He has been actively involved in the development of draft laws "On electronic signatures and electronic documents", "On e-commerce" in working groups organized by the  Milli Majlis.

He is the author of a number of popular scientific articles on the establishment of electronic signature infrastructure and biometric identification systems in the Republic of Azerbaijan.

He was a member of the program and an organizational committee of international and national conferences.

He has prepared a doctor of philosophy. He is currently the supervisor of four Ph.D. and doctoral students.

He teaches at the Training Innovation  Center of ANAS Institute of Information Technology.

He is the winner of the grant competition held in 2014 within the "ICT Year" jointly with the Science Development Fund under the President of Azerbaijan, the Ministry of Communications and Information Technologies.

In 2014 he was awarded the Honorary Diploma of the Institute.

In 2015 he was awarded the Honorary Diploma of the Department of Physical-Mathematical and Technical Sciences of ANAS for his long-term scientific and organizational activities.

In 2016 he was awarded the title of Associate Professor by the Higher Attestation Commission under the President of the Republic of Azerbaijan.