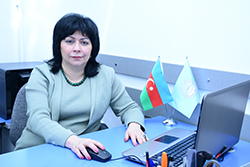 In 1989, she graduated from the faculty of "Automation and computing techniques" of the Azerbaijan Polytechnic Institute named after Ch.Yildirim.

She has worked as an engineer-programmer since 2018.

At present, she is a chief specialist at the institute.