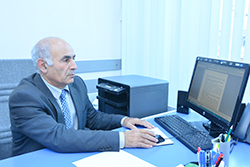 In 1972 he was accepted for employment to the Automated Control Systems department at the Institute of Cybernetics of Academy of Sciences, where he addressed issues of development of multi-purpose and multi-level control systems.

In 1973-1984 he addressed issues of software development of multi-purpose information systems. In 1986-1988 years within the framework of social-economical development plan of Azerbaijan SSR together with National Planning Committee he lead situation control works of re-developed and re-operated Automated Control Systems and Computing Devices in the ministries and head administrations.

In 1992-1993 he addressed issues of establishment and application of automated information systems in the activity Public Health Administration and Supreme Court in Baku city.

In 2002-2003 he actively participated in creation of www.science.az portal of Azerbaijan National Academy of Sciences.

He is the author of 48 articles, 25 of which were published abroad.

He teaches at the Education Center of ANAS Institute of Information Technologies.