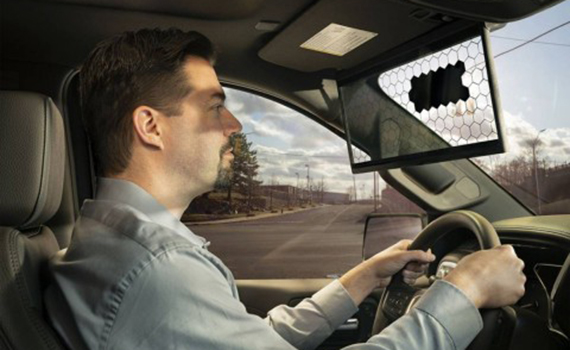 According to researchers, on sunny days, the risk of road accidents increases by about 16%. Familiar visors do not always save the driver from bright light, so Bosch came up with a smart panel that protects the eyes from the blinding sun and does not block his view.

According to 4pda.ru, the company called the device Virtual Visor. It is a panel with a transparent LCD-display, divided into hexagonal cells. When activated, the system independently determines which fields need to be darkened to protect the driver’s eyes from light. Where exactly the shadow should fall, calculates artificial intelligence, based on data from the built-in camera. Thus, most of the visor remains transparent and does not interfere with the review.

Bosch representatives noted that Virtual Visor was recognized as the "Best Innovation" at CES 2020. However, the company did not disclose plans for the implementation of the project. If such a panel really appears in real cars, it is quite possible that it will work in tandem with the driver’s video surveillance system previously introduced by Bosch. It uses built-in cameras throughout the cabin and monitors the behavior of the driver and passengers.