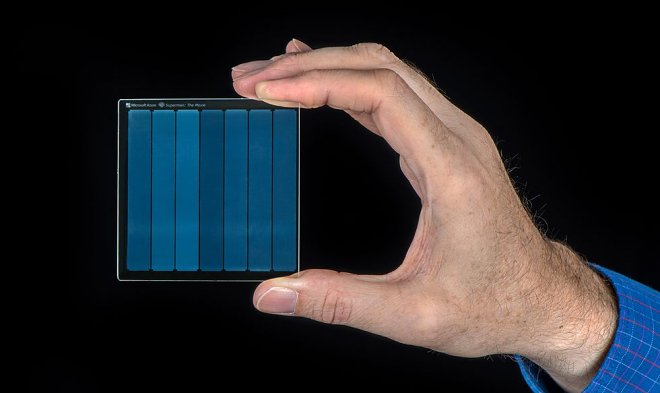 Microsoft has reported on the first major success of Project Silica, a quartz glass media project. Specialists managed to record the full digitized version of the 1978 Superman movie on a palm-sized glass plate. Theoretically, now it will exist for hundreds of years without any changes.

The idea of using a crystalline form of quartz for data storage is due to two factors. Firstly, it is a strong and extremely durable material that does not degrade when stored under normal conditions. Secondly, quartz is cheap, widespread and available in large quantities. And mankind already requires tremendous amounts of memory even to store the most important information.

A quartz data carrier will be permanent, like a vinyl record or a CD, the information on it is recorded using 3D laser engraving. It cannot be rewritten, but it can be counted an infinite number of times without harm to the medium itself. And thanks to this, quartz memory modules today seem to be an ideal solution for saving titanic volumes of secondary data.

For example, a medical record of a person or his bank account - these data are only added and stored to track the history of his activity. The same applies to the archives of companies, public services, scientific institutions. Where to store petabytes of weather observations, news articles of the past, music and video libraries? But the main thing is that you can save information on simple and cheap media that you usually spend a lot of money on. And thereby preserve and transmit to the future the whole history of mankind, starting from our days.