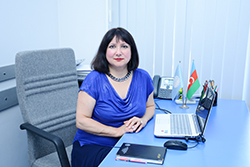 In 1979, she was hired as a Software Developer by the Institute of Cybernetics of Azerbaijan National Academy of Sciences (ANAS). Here she engaged in the creation of Automated Control System (ACS). In 1985 was promoted to the position of Senior Engineer, and in 1996 to the position of Lead Engineer at the ACS department of ANAS.

She is one of the creators of the current version of www.science.az portal and www.ict.az — the website of the Institute of Information Technology of ANAS.

In 2015, she was awarded with the Honorary Decree of the Department of Physics, Mathematics and Technical Sciences of ANAS for his long-term scientific and scientific-organizational activity.

He is the author of more than 50 scientific articles.

In 2018 she defended a thesis on “Development of Methods and Algorithms for Measurement Integration Processes between countries in Electronic government environment” and received her Ph.D degree.

Presently, she works as the head of department.